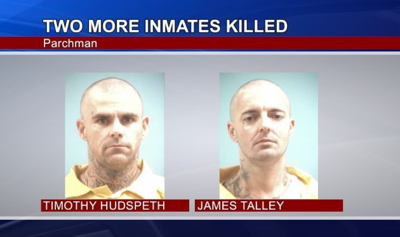 The death toll increasing to rise as wwo inmates were killed overnight at Parchman.

The Mississippi Department of Corrections released a statement saying it appears this was an isolated incident.

The two victims were identified as 35-year-old Timothy Hudspeth and 36-year-old James Talley.

Hudspeth and Talley were pronounced dead at the Parchman hospital.

This incident marks the second and third death at the Mississippi State Penitentiary this week, and now eight overall since an outbreak of violence at the start of the year.

MDOC says it is investigating the deaths.