Skip to main content
You have permission to edit this article.
Edit
Home
News
Weather
Sports
Community
What's On?
Double Dollar Deals
1 of 2 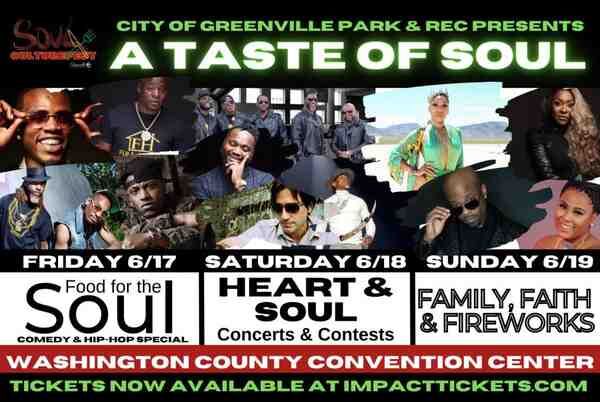 This poster advertises the city's huge weekend long celebration of Soul at the Washington County Convention Center Grounds over the Juneteenth and Father's Day weekend.

This poster advertises the city's huge weekend long celebration of Soul at the Washington County Convention Center Grounds over the Juneteenth and Father's Day weekend.

The move comes in the wake of the weekend-long "Taste of Soul Culture Fest" which attendees tell the Delta News, did not bring in the numbers or the revenues many had hoped for.

Council members approved an order "suspending immediately the parks and recreation department as such a time as an accounting of revenues and expenses related to the 'Taste of Soul Culture Fest' is provided to Greenville City Council by the Greenville Park Commission."

In a statement Tuesday night, Greenville Mayor Errick Simmons said, the" Mayor and Council are aware of the issues and/or concerns associated with the Taste of Soul Culture Fest. We are conducting an internal review and will report and respond transparently on any actions taken on this matter."

The mayor went on, to remind the public that the Greenville Parks and Recreation department is governed by the Parks Commission and all grievances, complaints and concerns should go directly to the commission.

The Delta News will look into the impact of this highly unusual move, Wednesday on all the Delta News broadcasts.