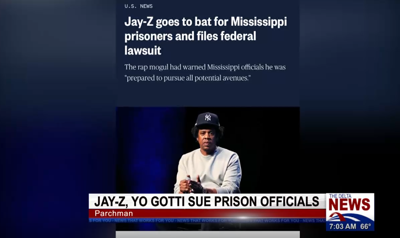 The eyes of the nation now on Parchman.

After musical mogul Jay-Z and Yo Gotti file an official federal lawsuit against.

Mississippi prison officials over conditions, The lawsuit filed on behalf of 29 inmates.

The lawsuit saying” Individuals held in Mississippi's prisons are dying because Mississippi has failed to fund its prisons ..and then goes on to say these deaths are a direct result of Mississippi s utter disregard for the people it has incarcerated and their constitutional rights,

Complaints of the conditions becoming wildly known after public outcry.

"My son is sitting in a cell right now, where his camel has been broken for five months and he use the bathroom in a plastic bag. He number one and number two in a plastic bag and tie it up and wait for somebody to come get it, whenever," says Houyse.

Sunflower County Sheriff Haywood even speaking on the ongoing issues at Parchman.

He says, "They are very under-staffed and very underpaid, you have to look at that as a contributing factor."

Hall is expected to step down this week, in wake of all of this MDOC announcing they are trying to find housing for 625 inmates from unit 29 after moving 325 to a nearby private prison.