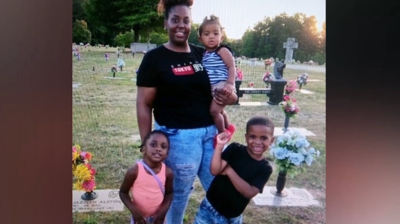 The state charging a mother from Georgia with the death of her daughter after she gave birth prematurely while visiting in Mississippi.

Most mothers spend their pregnancy dreaming of what that moment will be like when they finally meet their child but for Jocelyn Mclean the dream turned into a nightmare.

The 26-year-old mother of four is currently in jail awaiting trial after being charged with the murder her 8-day-old-daughter.

We got a chance to sit down with and hear her story.

Jocelyn McLean says, "me and the father was traveling to Mississippi and unfortunately i went into premature labor at 34 weeks and had an emergency c-section..when i had her i thought everything was normal."

The nightmare started for the McLean family in September of 2016. After Grenada Lakes sent Emeberly home after the premature baby still had complications.

"I had her and she was at the hospital for five days and (we) lost her on the eighth day," McLean says.

Baby Emberly only spent 36 hours outside of the hospital.

Jocelyn trying to pick up the pieces returned home to Georgia. The Mclean family spent the next two years searching for answers

"Unfortunately, we lost Emberly just being at the wrong place at the wrong time," says Jocelyn's mother, Yolanda.

After almost three years, the state ruled Emberly’s death a homicide and charged the mother of four with capital murder and felonious child abuse.

"She didn't do this to her child, she could never harm her child. She spoiled her children rotten. All of the was just a major medical issue," says Yolanda McLean

Jocelyn spending the last 9 months behind bars after denied bond twice despite having no criminal record, this leaving her to miss out on her other children growing up.

Yolanda McLean says, "it's unbearable but I literally have to do the best I can do especially under the circumstances."

Staying strong through this time is what the Mclean family plans to do. The family intends to continue fighting for justice and for the truth to be told about what really happened.