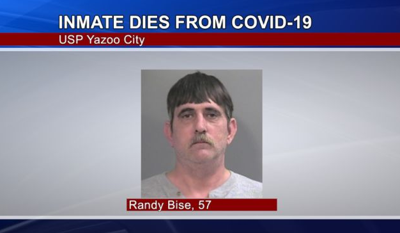 According to the Federal Bureau of Prisons, last week 57-year-old Randy Bise reported having a headache, loss of appetite, and feeling weak to health services staff at the United States Penitentiary in Yazoo City.

On May 1st, he tested positive for Covid-19 and was placed in isolation.

On Saturday May 2nd, he went into respiratory failure and was pronounced dead by EMS personnel.

Bise was sentenced to 30 years in Arkansas for production of child pornography in 2014, he has been in Yazoo City custody since 2019.